In this tutorial, we will build an application using AngularJS to check who’s in the office in realtime.

Let’s say you’re working remote, but – alas – alone and out of ethe loop, you want to see who’s in the office right now. Maybe a storm has hit your project, or maybe you just want to see the kind faces of friends who now seem very, very far away. “Who’s in the office?”, you say to yourself, pacing your living room. Who indeed?

‘Who’s In?’ is a very simple app that tracks live who comes and goes from work. It’s built from a local script that runs from the office and a free Heroku application. The script and the Heroku app chat to each other every couple of minutes to keep track of who’s in the office.

And the best part about it? It takes less than five minutes to set up.

Wow! How Do I Set It Up Using AngularJS?

For ease of use, we’ve created a very easy command-line interface that helps your office set up its own ‘Who’s In?’. Type this into your terminal:

The first command installs a gem that both initializes deployment and sets up a binary executable that scans your local network. The second command, when entered, should take you to the deployment page on Heroku. 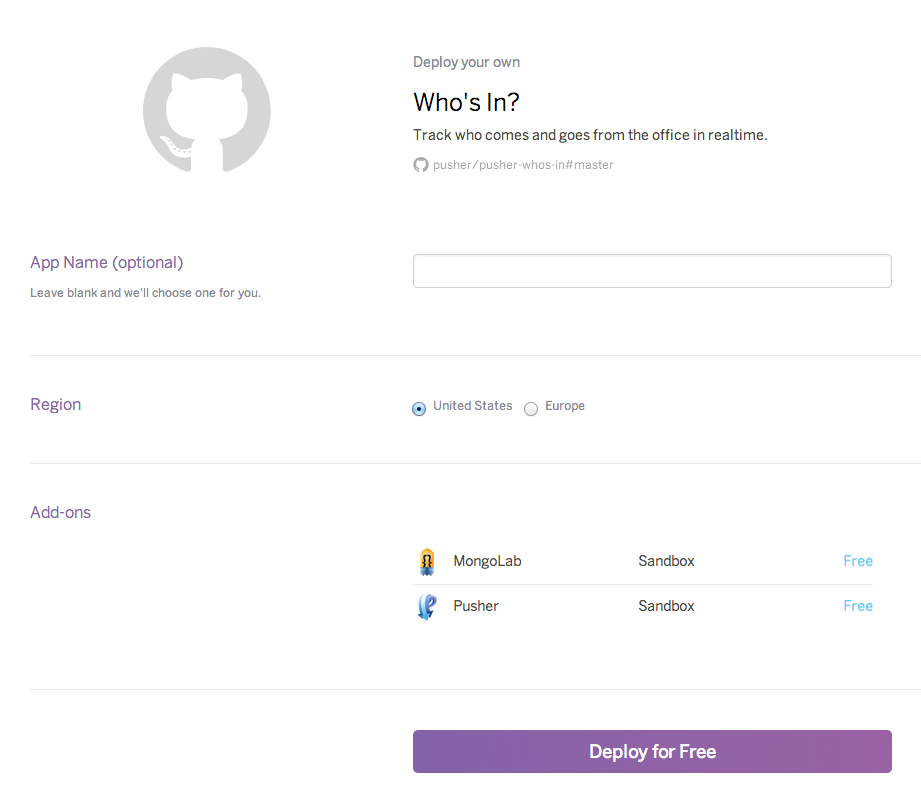 All you have to do is: name your app, choose the ‘United States’ region option, then click the shiny ‘Deploy For Free’ button.

This will set up your very own Heroku application, provisioned with a free Mongo database and a free Pusher add-on.

Now view your app and add some users. Simply enter their name and MAC and email addresses. ‘Who’s In’ will use the MAC addresses to identify whether your colleague is knocking about on your local network, and use their email address to fetch their gravatar.

And here’s the final step:

If your Heroku URL is mcdiddys-peeps.herokuapp.com, then type pusher-whos-in run mcdiddys-peeps. As this script requires root privileges, enter your password. (This will be explained further below).

The moment of truth! Go back to your app and you should see the page populated with some much-missed faces – opaque if they’re in, transparent if not.

So that Pusher’s Sandbox limits are not encroached upon, this page updates only every two minutes.

Furthermore, if you don’t wish to use the gem, or if you only want to run the app locally, you use the simple steps documented here.

How Does It Work, Then?

The pusher-whos-in run command runs a script every two minutes. This script uses NMap, which normally is used as a security scanner to discover hosts on a local network (thus requiring root privileges), to scan for MAC addresses.

The script then process the $macs array into JSON, and posts it to the Sinatra server running on Heroku. To do so, it uses your Heroku Pusher keys for Basic Authentication, having got them from your Heroku instance with the Pusher add-on.

The server then goes through the users in MongoDB, and sets present to true or false depending on whether their known MAC address was present in the posted list.

Then it triggers a simple Pusher event to the client, carrying all the people JSON objects stored in the database:

On the front-end, as it’s my framework of choice, I used AngularJS with the new Pusher-Angular library to take the people and assign them to scope:

Then using HTML, CSS and Angular {{expressions}} we can render everyone on the page, along with their gravatars and when they were last seen.

Can I Make It Better?

Absolutely, and we encourage you to!

We acknowledge that this is merely one of many ways you can show who’s in the office. If you can think of a better way, feel more than free to fork our Github repo and send us a pull request.

Here are some other ways you might improve on our app:

No doubt you have plenty ideas of your own – so, now we’ll leave it to you!

For more about building realtime applications, check out our tutorials library, updated on a regular basis.

From in-app chat to realtime graphs and location tracking, you can rely on Pusher to scale to million of users and trillions of messages