Last weekend Hamilton and I made the trip across the pond and across America to sunny San José. For the past year it has been a trip that we, as well as hackers from 14 cities around the globe, had been waiting for: the 2015 BattleHack World Finals. By the end of the weekend, one team would go away with the prizes they had been working towards: a golden axe and $100,000!

In the past year, we have travelled to London, Athens, Berlin, Tokyo, Venice, Toronto, New York, Stockholm and Tel Aviv – while other editions were held in Raleigh, LA, Singapore, Melbourne and Chicago. Each and every one was fantastic, setting a high standard of hacking, food, and hospitality. Yet the final – if it was possible – went one step beyond.

As soon as we entered PayPal Town Hall in San José, the venue was decked out with awesome decoration, lighting and layout for an event we could tell received a very special and dedicated amount of effort from the Braintree/PayPal team.

Introductory talks began at 11AM, where we were introduced by Jonathan LeBlanc to each of the 14 teams and viewed a video of their project pitches, which you can find below:

Called up to the stage was Bill Scott, Senior Director of UI Engineering at PayPal, to give a rousing speech to the hackers about their power to change the world. The King of BattleHack, Jon Lunn, laid out the timetable for the weekend, while also showing us an awesome video of the highlights of BattleHack 2015.

The partners – Twilio, Sendgrid, Heroku and ourselves – were invited to the stage to demo our APIs and show the contestants how to win their sweet prizes, which included gadgets such as Boosted Boards and Smart Balance Wheels. For the best use of realtime with Pusher, we gave away brand-new Apple Watches to everyone in the team.

As usual, once lunch is over, hacking commences with a gong. Hamilton and I were on hand to help any teams out with anything Pusher or non-Pusher related. Throughout the next 24 hours, we were excited to see what the teams came up with. There was an cornucopia of exciting tech being used: Arduinos, Raspberry Pis, Amazon Echos, Spark Cores, ReactJS, mobile apps on both iOS and Android – you name it.

In the evening the clock was stopped for an hour and a half for probably the most awesome dinner at any BattleHack we’ve been to (and that’s saying a lot). At 5PM we all sat down for the Mentors’ Dinner. Here contestants were given the opportunity to sit down with senior PayPal employees during a top-notch three-course meal and get feedback on their ideas. Each mentor would switch table after a course, allowing as many groups to get as many different perspectives as possible during the dinner.

Throughout the evening there were drinks, massages and a second dinner (a BattleHack standard!) to help hackers de-stress before their big night of coding.

By 2:30PM the next day, everyone had worked throughout the night, powered by Red Bull and coffee, as the hour where one of them would win $100,000 would get closer. Everyone surprisingly awake, they were putting on the final touches to what looked like, from afar, awesome hacks. Most of the teams had used Pusher – including even some cool last-minute integrations!

After lunch, the last gong of this year’s BattleHack went off. Contestants stopped hacking, awaiting their moment to present their hacks for the chance to win $100,000.

The audience, filled half with press and half with partners and contestants, were treated to a great round of presentations. Each team was given 5 minutes to present, as opposed to the 2 minutes they had when they had won their own chapter. The audience also welcomed the judges who would be deciding the recipients of the prize money: Bill Ready, the Global Head of Product and Engineering at PayPal; John Lunn, the Senior Director at Braintree and the King of BattleHack; Ken Yeung, writer at VentureBeat; and Craig Martin, co-founder and CTO at Luxe.

The Winners of the Pusher Prize

Given that most of the contestants used Pusher, it was a very difficult decision to pick a team that demonstrated the best use of realtime. 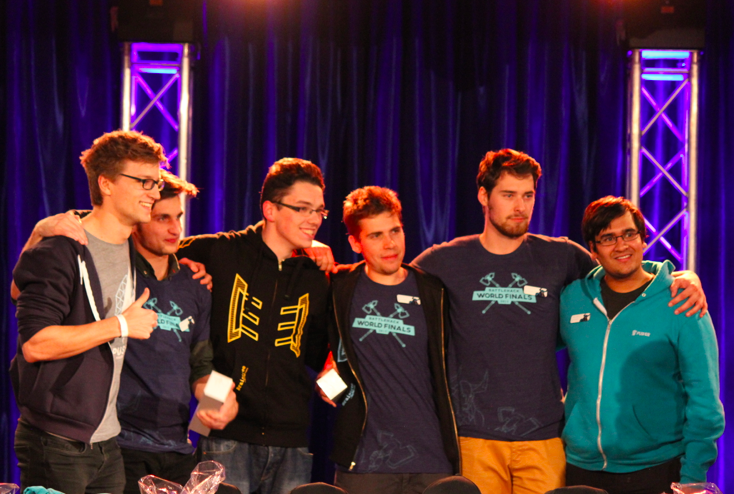 The team we ended up choosing had demonstrated an awesome use of Pusher, one that we have rarely – if ever – seen as a company at a hackathon.

Team Stockholm had built a system where users can report if they were experiencing a crime via a small Flic button, which would alert the emergency services using Twilio’s API. Then a drone powered by Pusher(!) would come to the area and take photographic evidence. Not only did they demonstrate the cool stuff that Pusher can do, but they did it in a way that was true to the BattleHack objective in aiding the common good.

The team that took home the $100,000 made, in 24 hours, an incredible hack that integrated both hardware and software to take an ordinary car and make it smarter. IfCar, by Team Venice, used a combination of sensors, environmental and user-generated data to make parking safer, as well as helping parents monitor children and pets in the car as they run errands. It could lower the back windows if the temperature got too hot, or alert you if you were parked on a hill and your wheels were at a wrong angle – and much more!

Congratulations Venice for such a sophisticated hack in such short time!

Thanks, Braintree and PayPal!

We’ve had an amazing year going to BattleHacks across the globe, and the finals were an even more incredible experience. The entire Braintree have been very welcoming and great to work with.

Congratulations to everyone involved for a third successful BattleHack!

From in-app chat to realtime graphs and location tracking, you can rely on Pusher to scale to million of users and trillions of messages